What is a proglotid and why should you care?

By robhillerby March 2, 2016 Uncategorized
No Comments 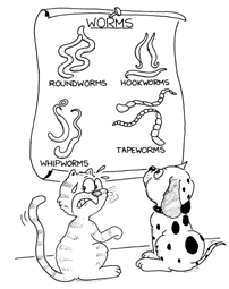 Recently in Ontario, the University of Guelph Ontario Veterinary College diagnosed 4 cases of Fox Tapeworm (Echincoccus multilocularis) in pet dogs. This small tapeworm which is infective to people had not previously been seen in Southern Ontario and so it’s presence raised some alarm. Lets take a look at this emerging parasite and see what it means to you.

(Taken from the worms and germs blog; <http://www.wormsandgermsblog.com/files/2008/04/M2-Echinococcus.pdf>

Now here is the scary part. People can develop Alveolar echinocococcis caused by E. multilocularis. With this species there are often multiple cysts that grow inside the accidental host, ranging in size from that of a sesame seed to a large melon. The cysts usually start in the liver but can form and spread elsewhere. Although the cysts grow slowly, usually for 5-15 years or more before a person becomes sick, they tend to invade nearby tissues like a cancerous tumor, making treatment very difficult.

The parasite can be detected in pets by examining stool samples. Deworming medications are used to treat infections in the intestines, but cysts can be more difficult to treat, even requiring surgical removal. Preventing infection in our pets and washing our hands, especially after handling dirt in gardens or flower beds are the most effective way to prevent infection.

If you have more questions about Fox Tapeworm or parasites in general, please feel free to contact us

How do I choose a dental treat?

How do I choose a dental treat?